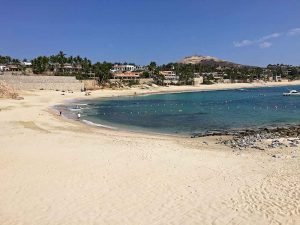 Playa Palmilla (Palmilla Beach)
This  San Jose del Cabo beach has been named a Blue Flag beach by the Blue Flag programme, which is operated under the auspices of the Foundation for Environmental Education and is headquartered in Copenhagen, Denmark. ( http://www.blueflag.global/)  Parking is available in two areas.Great for families, beautiful crescent-shaped Palmilla Bay has the best swimming beach near San José del Cabo. Swim, snorkel, charter a fishing panga, go for a walk, kayak, or just relax and watch the anglers returning with their catch. Photo on right May 2016 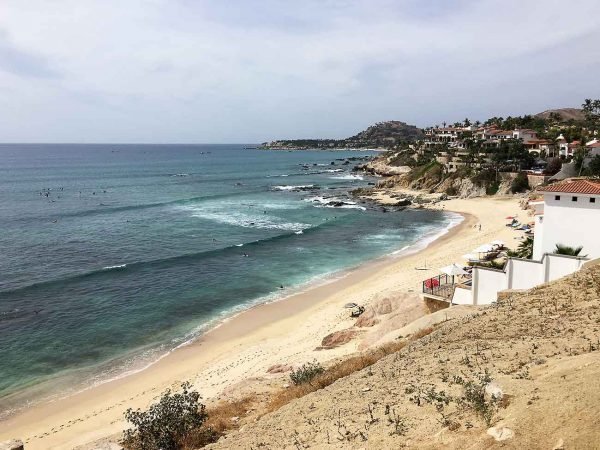 Zippers Beach and Surf Break
The surf break north of the arroyo on Playa Costa Azul, San Jose del Cabo is known as Zippers and is for the more advanced surfer.

Acapulquito Beach – Old Man’s Beach (Playa Acapulquito) – Km. 28
Just west of Playa Costa Azul is a little stretch of beach called Playa Acapulquito, known as Old Man’s Beach. It looks like the local surf spot has migrated to this area. Access is just off the new four lane highway at Km. 28. Swimming is possible, but watch for surfers.

Playa Costa Azul (Blue Coast Beach)
For great summer surfing head for Playa Costa Azul (Blue Coast Beach). The surf break north of the arroyo is known as Zippers and is for the more advanced surfer. Two breaks exist to the south – The Rock, and Old Man’s. The Rock is best for intermediate surfers and the second (a.k.a. Acapulquito Beach) for beginners or long boarders. There’s a surf camp, rental cabañas, beach restaurant, convenience store and services.

Playa Hotelera (Hotel Beach)
This mile long beach expanse runs from the south side of the San Jose del Cabo estuary next to the Presidente InterContinental All Inclusive Los Cabos Resort ending at the Las Mañanitas condo resort development on the south. Most of the hotels in this region feature fine pools and beach side activities, excluding swimming in the ocean.

Playa el Estero (Estuary Beach)
Beginning at the East end of the Playa Hotelera (Hotel Beach) in San José del Cabo, one will find San José’s famed estuary. The freshwater lagoon has over three hundred and fifty species of wildlife and lush vegetation. Fed by underground aquifers, the river and lagoon are one of the few oases in the otherwise nearly desolate lower Baja peninsula. September 05, 2005

La Playita (The Little Beach) Playita Beach
One of the newest beaches of Los Cabos—and easily one of its best—Playita Beach at Puerto Los Cabos features a safe, roped-off swimming area inside the harbor entrance, as well as a natural beach, where you can swim, skim-board, surf, or fish. Excerpt from Los Cabos Magazine Issue #22 – May 2010
Photo is of Puerto Los Cabos at La Playita on September 05, 2005.