Widow’s Beach, also known as Playa Las Viudas, is situated with access along the tourist corridor.  February 24, 2019. There is a lot of construction under way, but the entrance is clearly marked.  There are several portable toilets, often referred to as porta–potties  situated near the parking area.

Excerpt from Los Cabos Magazine Issue 35, Winter 2013-2014.
Widow’s Beach (Playa Las Viudas) What was once known as Twin Dolphins Beach has since been renamed Widow’s Beach, and the out-of-this-world volcanic formations are what one might expect to see in the afterlife—depending, of course, on how one has behaved in his current life. This is not the most swimmable beach, but it’s fun to explore the secluded shoreline and its tide pools. That same seclusion makes for a romantic setting come nightfall. Grab a bottle of wine and some blankets for some stargazing at midnight. There is a small parking lot and portable toilet facilities. You can access Widows at km 11.5, along the Tourist Corridor. Take the dirt road about 500 meters toward the ocean. Los Cabos Magazine Issue 35, Winter 2013-2014. 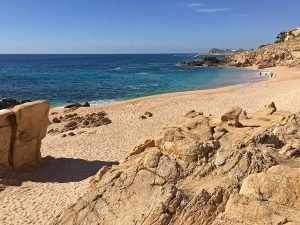 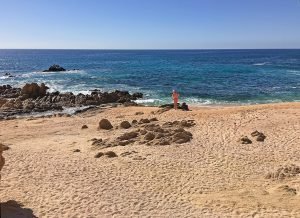 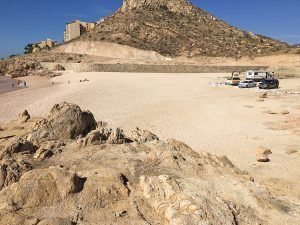 
Update August 2010: Playa Las Viudas, or Widow’s Beach (formerly known as Twin Dolphin Beach) offers privacy, tidal pools and swimming, with caution. There are no services. Access: Km. 11.5, to the west of the former Hotel Twin Dolphin entrance. Note: The Hotel Twin Dolphin is no longer in operation. It has been closed since 2006. The buildings were demolished during late 2006 or early 2007. The Chileno Bay Club is now under construction on this site. 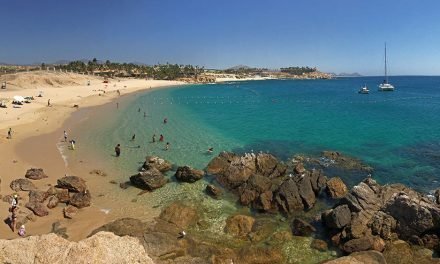 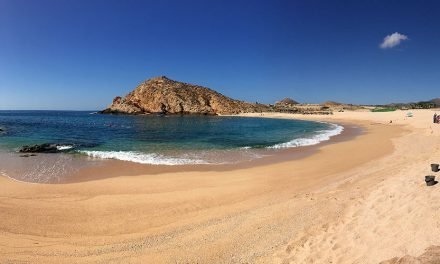