The beach is accessible from a path adjacent to the Presidente next to the estuary (parking), as well as in public access corridors found between the hotels. Some of the hotels such as the Royal Solaris will allow non-guests to use their pools and other facilities if you purchase a Day-Pass.  Photo on right from 2005.

Adjacent to the southern most corner of the estuary bordering the Presidente is a fenced-in area where sea turtle eggs are brought in for hatching and release back into the sea. Often visitors can participate in the releases by first checking with the hotel. The fresh water estuary is home to over 300 species of wildlife, was home for local Indian tribes for millennia and a fresh water re-supply source for Spanish galleons, pirate ships and whalers for centuries. You can stroll an asphalt path that runs from the Presidente to downtown San Jose paralleling the river for about a mile. It’s a favorite haunt for bird watchers.

Hotel Beach is generally not recommended for swimming due to a steep drop-off, under-tow, and high summer surf due to tropical disturbances originating from the south. Playa Hotelera (Hotel Beach) is fine for beach walks, surf fishing, horse riding or soaking up some sun. Public palapas can be found on the beach below Plaza Garuffi & Caracol (below the Mega store) on the south end of the playa. Above Plaza Garuffi is a lush park with fountains; children’s play equipment and an exhibition soccer field with covered bleachers.

Adjacent is Mega Plaza with twenty retail and fast food locales, waterfalls, and trampolines for the kids. Below Mega is the Rusty Putter restaurant, which has a public miniature golf course. Horse rentals are available in front of the Presidente and the Royal Solaris hotels as well as scooter, Jet Ski, and ATV’s. There are no public facilities or lifeguards on Hotel Beach but public restrooms are available at Mega, and in the public park adjacent to the soccer field below Mega. Beach parking is on street in front of the hotels. 19 February 2007 – David Mandich

A mile from historic downtown, Playa Hotelera (Hotel Beach), the long beachfront of San Jose del Cabo, is a steep beach definitely not recommended for swimming. This beach is popular with walkers, joggers, and dawn and dusk surf anglers. Playa Las Palmas, an easily accessed beach promenade with shade palapas, is below Plazas Garuffi and Caracol, between Viva and Sampaguita condominiums. While there are no watersports, volleyball is popular, with several nets along the beach. There’s a lot to do around Hotel Beach, with a children’s play park across from the Fiesta Inn, and a miniature golf course at the Rusty Putter restaurant. There’s the Don Manuel Orantes sea turtle camp and nursery at the beach’s extreme east end, next to the Presidente Inter-Continental. Next door is the lush San José estuary with many migrating birds, flora and fauna, and towering palm groves. A sand burm separates the estuary from the sea, making it possible to walk all the way east to La Playa, a small fishing village, also the site of the new marina at Puerto Los Cabos.
Access: Through any of the hotels, open spaces, or Playa Las Palmas along Paseo San Jose. 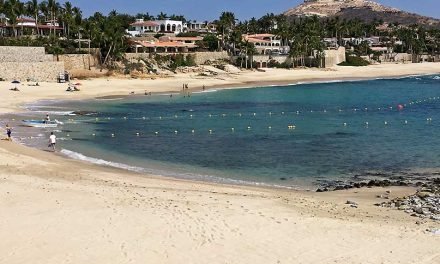 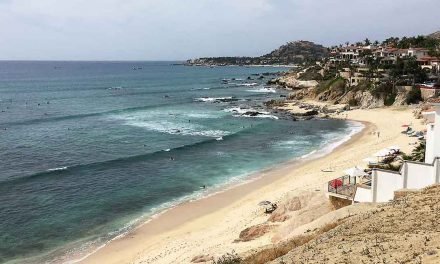 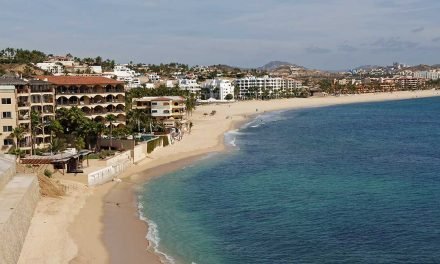